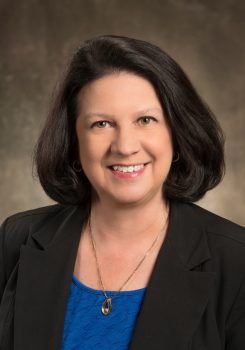 Christina McGrath has worked in libraries for nearly twenty years, beginning with her beloved library career in an elementary school library. From there, she graduated to working twelve months out of the year in a special library of educational resources for rural schools. Budget cuts for the non-profit entity forced layoffs and upon learning that hers would be among the positions cut, Chris returned immediately to school. After wrapping up her AAS Library Technician degree at Pueblo Community College (PCC), she embarked on the next leg of her educational journey by enrolling in the University of Maine at Augusta (UMA) Information and Library Science program.

Right on the heels of her UMA graduation in 2013, she was hired as a Library Technician II at PCC and began working under her previous library tech instructor and the PCC Library Director. That director soon retired and with her newly minted MLIS from San Jose State University (SJSU), Chris was selected as the lucky candidate to fill the director’s position in 2016. Three years later, she still feels incredibly fortunate to be the director in a beautiful academic library with a dream library team of three full-time employees and seven student employees.

Chris is the daughter of octogenarians (Mom’s 86 & Dad’s 88), the mother of three children, grandmother of four, and has been married to the love of her life for 32 years. She lives in beautiful Southern Colorado, where she can see 180 degrees of mountain views from her back patio and counts her many blessings every day.