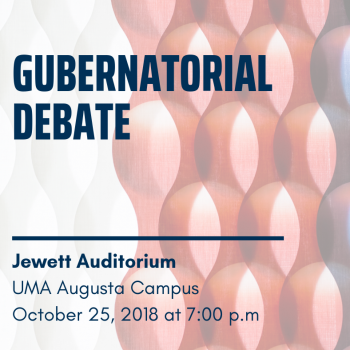 WMTW-Portland, WABI-Bangor and WAGM-Presque Isle television stations are collaborating for a statewide broadcast of a gubernatorial debate from Jewett Auditorium located at the UMA Augusta campus, on October 25, 2018 at 7:00 p.m.

UMA is pleased to host WMTW, WABI and WAGM and thereby provide Maine citizens with an opportunity to hear from those candidates running for governor. The debate will be held at 7:00 p.m. and broadcast live on WABI and WAGM. WMTW will broadcast the debate in its entirety at 8:00 p.m.

Please Note: Seating in Jewett Auditorium is limited and available on a first come, first serve basis. Doors will open 30 minutes prior to the event.