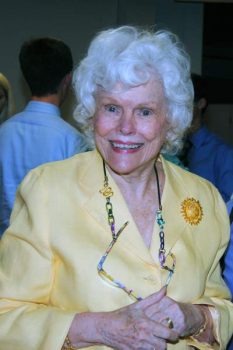 Doris Buffett, known as a retail philanthropist, died at her home in Rockport on Tuesday, August 4, 2020, at the age of 92. The following tribute was sent to UMA Rockland‘s Director, Deborah Meehan, by Shaun Libby, an inmate at the Maine State Prison.

Through Doris Buffett’s generosity, in 2006 the University of Maine at Augusta started a college program at the Maine State Prison. Since then 141 college degrees have been awarded. The recidivism rate for the college students is less than 5%. The program continues to this day and has expanded to 5 correctional facilities in Maine.

Doris Buffett was a Superhero.  This may seem like an odd statement to most, but I assure you for those who knew Doris Buffett it’s not odd at all.  I know what some of you may be thinking. What superpowers did Doris Buffett have? I counter by asking what superpowers do Bruce Wayne (Batman) and Tony Stark (Iron Man) have?  They’re just rich guys with an affinity for tech.  Doris may have been wealthy but, instead of an affinity for tech, she had an affinity for people and their stories.  Like those well-known superheroes, Doris used her wealth to fight injustice and inequality.  Her powers were kindness, faith in people, and the belief in the ability of people to change.  Instead of making shiny suits (she preferred sweaters) and fancy gadgets (a smile and a handshake) Doris actually talked to people, and perhaps more importantly, listened to them.  In this day and age, I would argue those are superpowers that rival any others.

If you still want to continue this debate you may point out that superheroes regularly save the lives of countless people.  Well, the simple answer to that is so did Doris Buffett.  The work she and her Sunshine Lady Foundation have done to help survivors of Domestic Violence undoubtedly saved countless lives of women and their children.  However, for Doris and her work it wasn’t just about saving someone from imminent death and then flying away. She was all about helping people better their lives moving forward.  She was known to ask, “What’s next?”, meaning if she helped someone out of particular circumstances she wanted to know what could be done to make sure they never found themselves in those same circumstances again.  Doris was also known to say she wanted to help people help themselves by giving them a hand up not a hand out.

Not convinced yet?  You say that superheroes are expected to keep our communities safe and ask how one woman could do that.  Well, allow me to tell you.  First, she was not just one woman doing it.  Like many other superheroes, Doris had her trusty sidekick Mitty Beal and a team of talented women around her akin to the Avengers or the Justice League.  Secondly, the national recidivism rate is roughly 65%.  This means that roughly 65% of people released from prisons and jails around the country will return within three years.  They get released and continue committing countless crimes and creating more victims in our communities, which, in turn, makes our communities less safe.  Doris learned about this problem and decided to do something about it. Through her Sunshine Lady Foundation she established college programs in numerous prisons in multiple states.  Numerous people graduated from college through her programs and those graduates collectively have a recidivism rate in the single digits. In Maine the rate is less than 5%. That is a huge drop in people returning to prison or jail, which means a huge drop in new crimes, new victims of crime, and that unquestionably makes our communities a whole lot safer.

Still not convinced? Well then maybe you need some time away in Arkham Asylum (sorry, a Batman comic book reference).  You may not be convinced by reading this, but there are countless people in this world who knew Doris, and who Doris helped, who are convinced.  I was convinced way before I ever met Doris. I came to know Doris as the Sunshine Lady (alter ego, check!) after I was told I was accepted into the inaugural group of the Sunshine Lady Foundation- University of Maine at Augusta College Program at the Maine State Prison.  The fact that this woman, whom I had never met, was putting her money and faith behind me absolutely blew my mind.  The more I learned about Doris the more I understood that was just who she was.  The first time I had the honor of meeting Doris I couldn’t stop thanking her for the opportunity she had given me and the other men in our group.  Doris told me that the best way I could show my appreciation was to excel in my studies and continue paying it forward.  I graduated from UMA with my Bachelor’s Degree in Mental Health and Human Services and am involved in various positive things around here to help people better this environment, as are many other men.  It is by no means a coincidence that many of the men doing positive work inside and outside these walls were also recipients of Doris’ generosity.

Some people say you should never meet your heroes. The insinuation is that they will let you down or disappoint you in some way.  Well, I was fortunate enough to meet one of my heroes on multiple occasions and I am grateful, and far better off, for each opportunity.  Doris gave me, and so many others, hope for a better future and very few people have that kind of power.  It is exceptionally rare that you get to meet someone who possesses the power to make you want to be better and do better, but Doris Buffett was indeed one of those rare people.

Doris wasn’t flashy, didn’t have superhuman strength, and she wasn’t a martial arts expert. Her fighting style could best be described as hand-to-hand philanthropy.  However, like the best superheroes, Doris Buffett’s powers were always used for good and they undeniably changed the world for the better.  She is already greatly missed and will be for a very long time.

Rest in peace Sunshine Lady. Your legacy will live on in those who knew you and the countless people you helped with your powers.