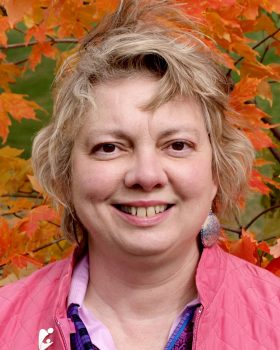 Augusta, ME – Patricia Clark, University of Maine at Augusta (UMA) Director of Early Childhood Studies and Lecturer of Mental Health and Human Services and Education, has been recognized as the 2022 Maine Mother of the Year by American Mothers, Inc.  Clark, of Readfield, will join 49 other mothers in representing their states at the annual American Mothers, Inc.® conference in April where the national winner will be recognized.

For her platform, Clark has chosen early childhood literacy and “closing the million word gap” among children entering kindergarten. According to a recent Ohio State study, young children whose parents frequently read to them could enter kindergarten having heard an estimated 1.4 million more words than children who were rarely or never read to.  “In our current world where televisions, i-pads and phones are everywhere, we sometimes forget the benefits and bonding of carving out just 20 minutes a day to read to our children,” Clark stated.

Mothers were chosen after a national nomination and selection process led by the nonprofit organization. Clark represents the 61st Maine mother chosen since the program began 87 years ago. Their mission is to recognize mothers and their positive impact in their families and communities. The women come from diverse backgrounds and experiences across the nation.

“Time and time again, we have seen that there is no one like mom, and we at American Mothers for the last 87 years have had the privilege of recognizing the impact mothers have in our lives,” said Joyce Stevens, President of American Mothers, Inc. “Now more than ever, people are seeing the work that goes into motherhood and truly recognizing the resiliency of mothers. It is an honor to be an organization that has built a legacy network of moms across the nation while sharing their stories of strength and inspiration.”

A former president of the Maine Association for the Education of Young Children, Clark is active in her church, St. Andrew’s in Winthrop and a member of various boards including Readfield Community Library, Healthy Communities of the Capital Area, UMA Senior College, and Southern Kennebec Child Development Center.