Richard Nelson is a composer and guitarist who fosters a healthy creative interplay between in-the-moment spontaneity of improvisational explorations and the more deliberately organized realms of composition.  His Imaginary Ensemble–flexible in instrumentation, wide-ranging in genre–defies categorization with programs that range from fully-composed pieces and progressive jazz (and improvised music of all sorts) to straight-ahead jazz and music across the rock/pop/folk/blues spectrum.   Nelson’s playing has been called “serious . . . intense . . . imaginative . . . and profound” by All Music Guide, and his compositions have been praised in Cadence for their “thirst for experimentation . . . pushing of known boundaries . . . and appreciation for the time-tested sounds of the tradition.”

Nelson is happy to have the opportunity to bring the depth and diversity of his musical experiences to students in the UMA Music Program. As Head of the Sonic Arts and Composition Concentration, he fosters creativity and guides student development in a wide array of genres and styles – ranging from songwriting/popular music and electronic/computer-based music to jazz and contemporary classical composition.

As a jazz guitarist, Nelson has performed at such locations as the Concord and Boston Globe Jazz Festivals, New York’s Symphony Space and the South African Broadcasting Corporation Theater in Cape Town, South Africa.  Musicians he has performed alongside include, in his student years, Slide Hampton, Joe Henderson and Joe Pass, and more recently, Sheila Jordan, Geri Allen, Robert Hurst, Mat Maneri, Taylor Ho Bynum, Walter Thompson, and Maine’s Don Stratton.  Many of these appearances have been with the Boston-based Aardvark Jazz Orchestra, of which he has been a core member for many years.

Nelson’s playing is featured on numerous CDs, both under his own leadership and that of others. His most recent album, “Pursuit,” features a thirteen-player ensemble of UMA faculty and graduates. This extended work has been called “a significant American composition” by the Portland Phoenix and a “bold and highly satisfying musical statement” by the Portland Press Herald.

An accomplished contemporary classical composer as well, Nelson’s classical pieces have been performed by such groups as Speculum Musicae, ALEA III, and the Charleston Symphony Orchestra. The Boston-based duo “2” (Peter Bloom and Mary-Jane Rupert) frequently performs his recent composition “Play of Light” for flute and harp in concerts across the country. A native of the San Francisco Bay Area, in his earlier years he led the locally legendary jazz-meets-Zappa group NOW! in Berkeley, and he played in San Francisco’s punk/new wave clubs (such as the Mabuhay Gardens) as songwriter, guitarist and lead vocalist for Noble Barrister and the Absolutes. 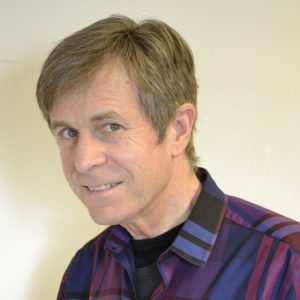