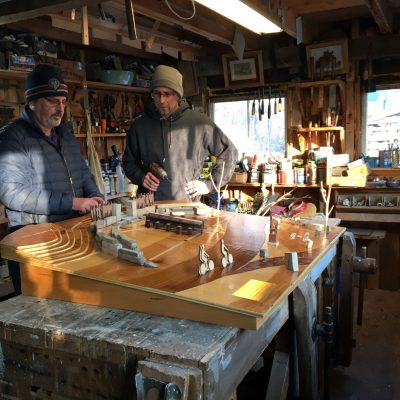 Professor Robert Katz working on the model in the workshop of Dan Mitchell, also pictured at right. 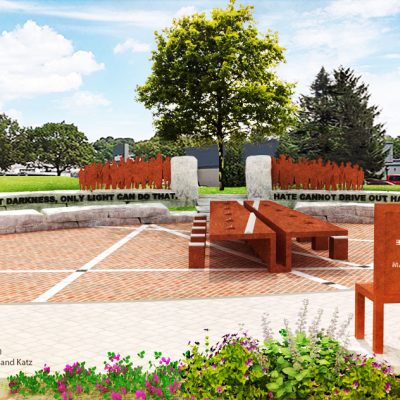 Rendering of “The Welcome Table,” Scene 1 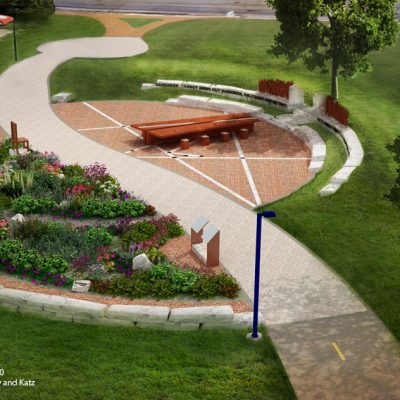 Rendering of “The Welcome Table,” Scene 2

Hallowell resident and University of Maine at Augusta (UMA) art professor Robert Katz spent the past 10 months researching the life of Dr. Martin Luther King, Jr. and the Civil Rights Movement in an effort to design a meaningful and enduring memorial dedicated to Dr. King’s life and legacy.

As a finalist in the MLK design competition sponsored by the City of Portland, Katz assembled a team of educators, artists, architects, historians and craftspeople to join him in a collaborative design process.

On his team were numerous Maine residents, including: Ben Stoodley and Arielle Cousens of Readfield, who are both graduates of UMA’s art and architecture programs and who are established architectural designers; Chris Meyers Asch of Hallowell, who is a nationally recognized civil rights historian; and Douglas Quin, a Professor of Communications at Syracuse University. In addition, Noah Katz, a 9th grader at Kents Hill School, provided background research and graphic images for the team’s initial conceptual plans. Katz invited his son, Noah, to be a part of the team because he felt that it was imperative to have a young person’s perspective of Dr. King’s achievements. He believed that his team’s design would serve as a resource for future generations of Maine students who need to be aware of Dr. King’s place in American history and the ongoing struggle for equality and social justice in our society.

On March 3, Katz and his team arrived at Portland’s City Hall to present their final design to the selection committee. They were the only design team left in the competition. After their presentation, discussions and questions followed. Then Katz and his team began their drive back to Augusta. The committee’s deliberations were live streamed, and, before they arrived home, their phones were ringing with friends and colleagues from around the country informing them that the committee had decided not to move forward with their, or any other, submitted design proposal.

“I felt sorry for my team members, who worked so diligently during these many months and believed so strongly that they had met all of the criteria originally set out by the selection committee,” Katz recalled.

He reminded his team of his opening remarks that evening when he addressed the committee members, “We are honored to be a part of the process to design a permanent memorial dedicated to the life of Dr. King. Regardless of the decision that this committee comes to, I wish to thank you for the opportunity to share with you today our design entitled ‘The Welcome Table’, an aspirational goal often referenced by Dr. King. We must remember that the story of Dr. Martin Luther King and the civil rights movement must remain in the forefront of our collective consciousness as we continue to negotiate our way through an imperfect society.“

In the days following the decision, comments from the community arrived bolstering Katz’s team vision for their memorial design.

Cumberland resident Nick Mills, an award winning journalist and combat photographer wrote, “I have visited Maya Lin’s Wall in Washington DC a number of times and it always buckles my knees. For many veterans, her Wall perfectly captures the essence of the Viet Nam experience like no figurative work can do. Similarly, Katz’s (MLK) design invites communication and thought, not simply about a man but about what he stood for and died for.”

Judith Sobol, the curator of collections for the Iris and Gerald Cantor Foundation wrote “I am impressed by the thoughtful symbolism, complicated yet never overpowering, and the grace and lyricism of the whole sculpture project. I bow to you and your team”.

Then Katz received an unexpected message from Dr. Aaron Rosen, Director of the Henry Luce lll Center for the Arts and Religion in Washington DC, and a native of Pittsfield, Maine. “Yours is precisely the type of memorial Dr. King would have wanted, pushing the struggle forward, together.” With those remarks, Dr. Rosen then invited Katz to bring the model and renderings to Washington D.C., where it is expected to go on permanent display at the Wesley Theological Seminary. In addition, discussions will begin for the possible fabrication of the memorial.

Originally designed for the Bayside Trail site in Portland, The Welcome Table may now be installed in the city of the Lincoln Memorial where Dr. King gave his memorable, “I Have A Dream” speech in 1963 to a gathering of 250,000 people.

As Katz reminded his team a few weeks ago, “When one door closes, another opens.”

For more information about Katz’s design and photographs of the model and renderings, contact him at rkatz@maine.edu or at 592-8639.

Image 3 – Professor Robert Katz working on the model in the workshop of Dan Mitchell, also pictured at right.