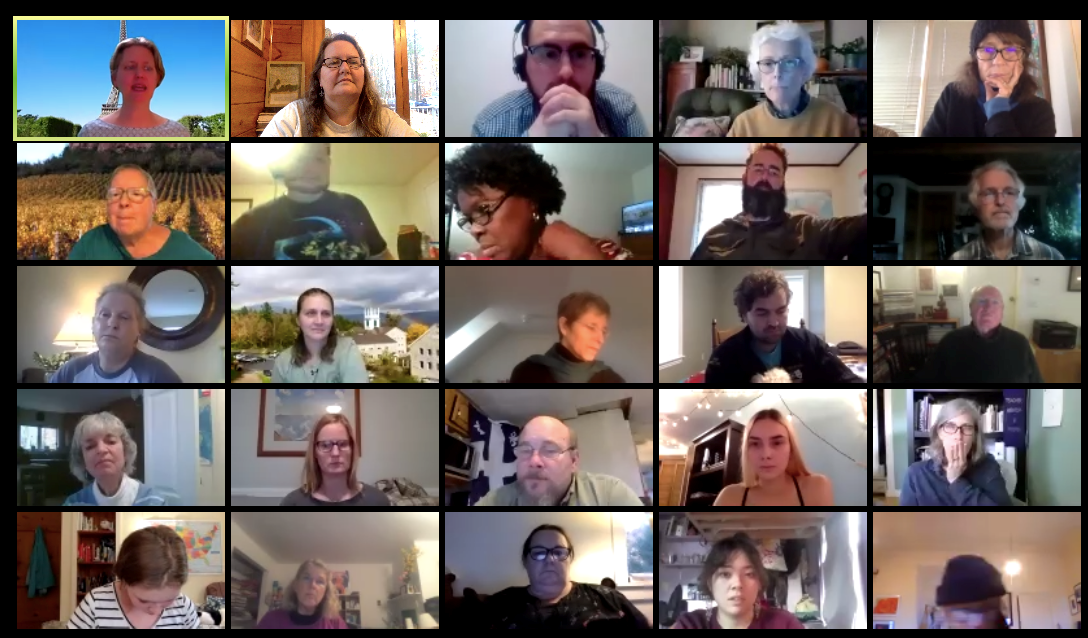 The University of Maine at Augusta sponsored its third French immersion weekend in October 2020, in the tradition of Le français au bord de la mer. Due to the pandemic, the entire immersion day took place on Zoom, with the same vitality and enthusiasm as previous in-person immersion camping trips. The theme was “Le français branché” (“French plugged in”) to emphasize that French is “plugged into” many cultures, many continents, and can translate across virtual platforms.

UMA Professor Chelsea Ray coordinated this program, which is one of French at UMA’s signature events. It is co-sponsored by the Maine chapter of the American Association of Teachers of French. The chapter’s President, Nathalie Gorey, plays a key role on the planning committee. It aims to bring a diverse group of French speakers together to practice and expand upon their language skills, make new friends, and learn more about the French-speaking world.

There were over 50 participants, and they came with diverse backgrounds and varying levels of French: high school and university students (some attending with their French teachers), French teachers, and adult community members participated. They attended via Zoom from a variety of places, including Maine, Massachusetts, Rhode Island, Minnesota, and France. Participants filled out an evaluation and regarded the weekend as a great success. According to Professor Ray, “It was exciting to see the workshop leaders and participants come together on Zoom, all for the joy of learning French and connecting with each other. Although the format was different, we still were able to make lasting connections and see old friends as well.”

Participants could register for workshops that suited their interests and language level. The volunteer workshop leaders included four UMA students on exchange from the University of Western Brittany (Université de Bretagne Occidentale, UBO) in France. The workshops were wide-ranging. Two students from UBO taught the group how to make crêpes. Jean-Claude Redonnet, professor emeritus from the Sorbonne University, taught an advanced workshop on memory and reading, using his own creative writing piece on Acadian culture. Other topics included: online exchanges with Quebec, a conversation with a former UMA student currently living abroad in France, North African dancing, and games such as Kahoot or trivia.

Singer/songwriter Brice Kapel gave a midday concert to the group. He is originally from Togo and now lives in France, so songs were in Mina (a native language to Togo), French, and English. His latest album, “Eteignons les écrans” (“Let’s Turn Off the Screens”) underscored the theme of the day, “Le français branché” (French plugged in). Participants had access to the words and translations for many of the songs, so that even less advanced speakers could fully appreciate the depth and meaning of the songs. In addition, Kapel gave a special afternoon workshop in which participants helped to create a new song.

Participant evaluations made it clear that the group greatly appreciated the diversity of ages, French language abilities, and cultural origins represented. When asked what they liked best about the weekend, one replied, “French in Maine!! Meeting Bénédicte and the other [people from the Democratic Republic of Congo] was cool, too. I liked the knitting circle as well; we had a great time talking and knitting!” Another wrote that her favorite workshops were Hatha Yoga, Theater Games, and a session meeting Professor Ray’s host family (attending from France via Zoom).

Julia Schulz, who founded the program at the Penobscot Bay Language School in 1991, described the purpose of the weekend: “Our experienced and dedicated instructors create a safe and fun learning environment for students of French, whether they are adolescents or senior citizens, or any age in between. Engaging together in activities like singing, games, crafts, cooking, and theater, all conducted entirely in French, creates a lively and cohesive learning community, much like daily life in a French-speaking country!”

Scholarship sponsors for the weekend included the University of Maine and the Maine Chapter of the American Association of Teachers of French (AATF). A Small Grant from the National AATF helped to support the weekend. French at UMA (current for this year)

The UMA Faculty Development Center (FDC) supported the Immersion Day on Zoom by providing additional training to Professor Ray. She then helped the teaching team gain confidence and better understand how to utilize the technology for an optimal learning experience. Greg Keneborus provided technical support throughout the day to help those who experienced issues. Professor Ray also held a training for all participants the week before the immersion day to give everyone a chance to try Zoom and meet each other before the actual day.

Due to uncertainty about the pandemic during the planning period, the next French immersion will be on Zoom as well. It will take place January 14-15th 2022. Participants will do ice breakers and watch and discuss a short film on Friday night and then participate in the day-long immersion the next day.