A Michigan native, Robert Kellerman holds a bachelor’s degree from the University of Michigan at Flint and a master’s and doctoral degree from Michigan State University, where he specialized in medieval and Renaissance English literature. Dr. Kellerman has worked both in and out of academic settings. He has worked a professional editor, a communications and public relations director, and a musician, having performed with various early music ensembles since the early 1980s. He has taught literature and composition at Michigan State University, Alma College (Michigan), and, previous to his appointment at UMA, in the far west Pacific at the University of Guam. In 2011, he taught in a summer program at Harbin Institute of Technology in Harbin, China, and for the spring term of 2017 he was awarded a Fulbright fellowship to teach at Daugavpils University in Daugavpils, Latvia.

Dr. Kellerman is currently the director of the UMA Honors Program.

Dr. Kellerman’s research interests include early English devotional and religious literature, medieval and Renaissance drama, and Shakespeare. He has developed a keen interest in contemporary lgbt literature and graphic narratives, and he now publishes in this field as well. Because medieval and Renaissance literature is unfamiliar territory for many of his students, he strives to make connections between the distant past and the present, reading early cultures in how they differ radically from but also lay the foundations for the modern world.

“Goodbye, Barbary Lane: The Passage of Time in the Recent Novels of Armistead Maupin.” Journal of American Culture January 2016.

“Being, Doing, and Agency in Shakespeare’s Pericles.” Chapter in Proceedings of the Medieval and Renaissance Forum,” edited by Meriem Pagès and Robert Sullivan. Cambridge Scholars Press, 2016.

“And Gladly Wolde He Teche: The Medievalist and the History of the English Language Course.” Chapter in The Ballad of the Lone Medievalist, edited by Kisha Tracy and John P. Sexton. Punctum, 2017. 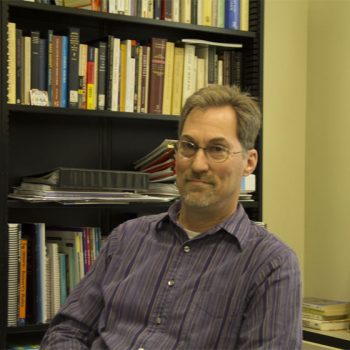