The University of Maine at Augusta Bangor Campus community came together early this month to honor their 2019 graduates at a Graduate & Awards Banquet at Jeff’s Catering in Brewer. Many awards were presented during the evening’s festivities. 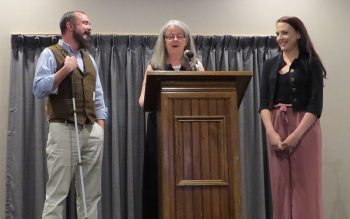 Among those honored were Kayla Marie Kalel, recipient of the Outstanding Civic Engagement Award, recognizing a UMA student who has gone above and beyond in service to the campus and greater Bangor community. Nicole Brennan, Amy Cossar, and Nicole Rust received Bennett D. Katz Scholarships presented by Robert Roper, Interim Dean of the UMA Bangor Campus and Kent Corey, UMA Bangor Campus Coordinator of Student Life.

Samuel Atwood was the recipient of several awards, including the UMA Bangor Campus Outstanding Student of the Year, presented by Professor of Mental Health and Human Services David Samuelian, and Outstanding TRIO Scholar Award. Atwood was also honored for his service as UMA Student Representative to the University of Maine System Board of Trustees.

The P. David DeFroscia Students’ Choice Award was presented to Jennifer Mascaro by Jacquelyn Estrella, Student General Assembly Chair. This award is given in memory of Dr. DeFroscia, Professor of History at UMA Bangor Campus, and recognizes a Bangor Campus faculty or staff member selected by students. Mascaro is Director of the Center for Student Support and Development on the UMA Bangor Campus.