The UMA Admissions Team is here to assist you with any questions you have about admissions, degree programs, enrollment, financial aid, life at UMA, and more. Scroll below to learn more about us and how we’re committed to helping you on your educational journey. 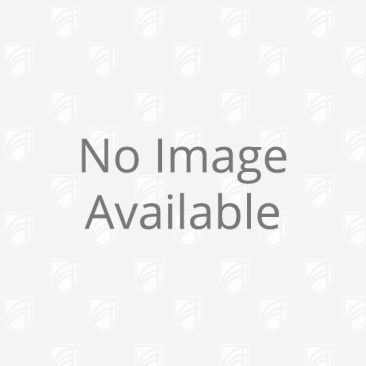 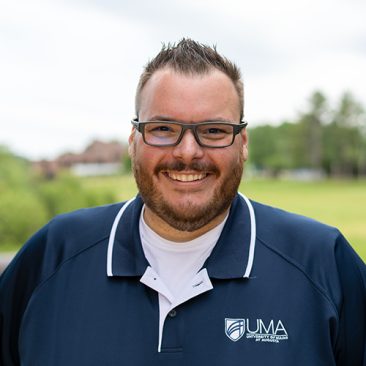 Dylan recently joined the admissions team as the Assistant Director of Admissions. In this role, Dylan assists new students with all facets of the application process. Dylan has worked in various areas of higher education since 2012, including Athletics, Financial Aid, and Admissions. He currently holds a BS in Science and Humanities from Husson University and an MS in Sport Management from Southern New Hampshire University. He is currently enrolled in the Certificate of Advanced Studies in Adult and Higher Education program at USM.

While not at work, Dylan enjoys spending time with his wife and two young sons. He is also an avid sports fan, his favorite sports teams include the Boston Celtics and New England Patriots. 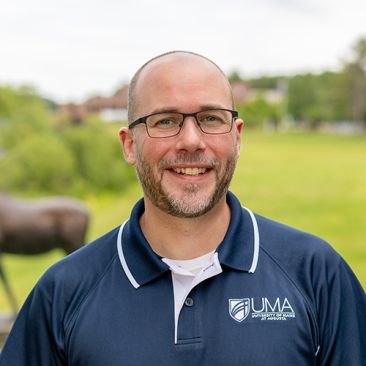 Jeremy is currently an undergraduate student at UMA. Though Jeremy was a biology major for three years, he recently switched programs to complete a Bachelor of Liberal Studies with a minor in Biology. His intentions for doing this was because Jeremy discovered a passion for higher education. Once finishing his undergraduate degree, Jeremy plans to enroll in a Master’s degree in Higher Education. Specifically, Jeremy would like to focus on Adult Learning.

Currently, Jeremy and his husband reside in Augusta where they are both avid gardeners and greatly enjoy all things outdoors. They often “get away” for camping trips, hiking adventures, and ice fishing excursions.

Please feel free to stop in and ask Jeremy how UMA can assist you with your educational and career goals and aspirations. He’s happy to help! 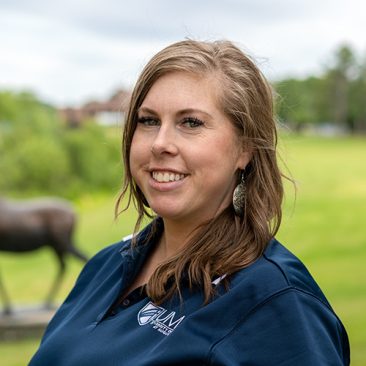 Ariel has worked at UMA supporting the Admissions Department in various capacities since 2007. She currently manages the prospective student database, digital communications, and text messaging operations. Ariel enjoys leveraging technology to not only make her team’s jobs more efficient but to make the Admissions process as accessible, seamless and clear as possible for prospective students.

In addition, she is currently pursuing a Bachelor’s Degree in Liberal Studies. A “typical” non-traditional student, Ariel prides herself in working full time while maintaining a 4.0 GPA as a part-time student. Ariel grew up breeding and showing her champion German Shepherds all over the United States. She has exhibited at the prestigious Westminster Kennel Club Dog Show on several occasions, and one of her dogs was featured in Martha Stewart Magazine. 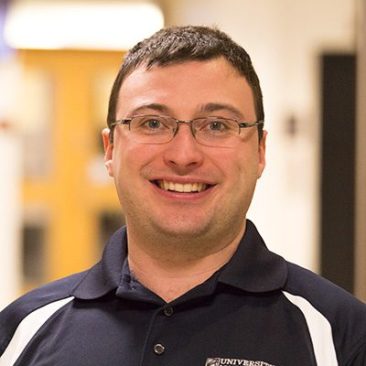 Leo is an Alumnus of the University of Maine at Augusta and can be found at the front desk in the Office of Admissions. He enjoys assisting students with the application process, enrolling in courses, and providing information regarding the many degree programs offered at UMA.

Leo has lived in Augusta all his life and has been a board member of the Augusta Downtown Alliance since 2015. In his spare time, he enjoys hiking, biking, kayaking, and playing tennis. Leo graduated from UMA in 2010 but continues to take courses whenever he can.

Please feel welcome to reach out to him with any questions you may have. 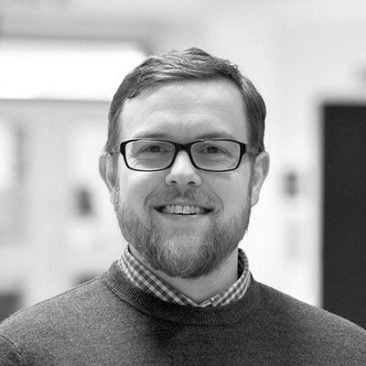 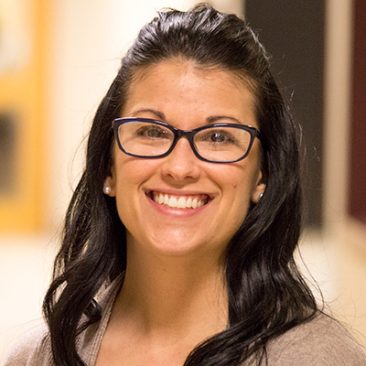 Gail has worked in Admissions at UMA for over 13 years and has achieved both an associates in Liberal Studies and a bachelor’s in Social Sciences. Within the next year she is looking to pursue her Master’s Degree from USM in either Leadership Studies or Adult and Higher Education.

Within admissions, Gail reviews student applications and meets with applicants and prospective students. She develops and coordinates activities designed to assist individuals and groups with admissions and enrollment steps. In addition, Gail is the primary point of contact for high school, Community College and Adult Education groups interested in visiting the Augusta campus.

In her free time she enjoys camping, hiking, going to the beach and gathering with friends and family.

The UMA Admissions Ambassador Scholarship Program provides unique leadership opportunities for students on both the Augusta and Bangor Campuses. Student Ambassadors assist the Admissions office through recruitment/outreach efforts, program assistance, and campus tours all while being active in the UMA community and maintaining high academic standards. 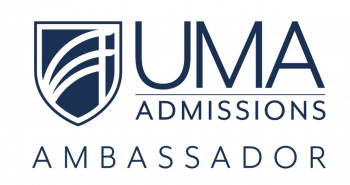 Landen is a sophomore in the Computer Information Systems (CIS) program from Winthrop Maine. He is no stranger to UMA, completing 18 college credits before graduating high school – taking UMA classes through the Early College program. Landen was interested in attending UMA because of the strong CIS program and after seeing the dorms at Stevens Commons he knew he wanted to call UMA home. As a senior Admissions Ambassador, he is excited to assist the admissions team and show potential students how they can call UMA home too! Landen was also named a 2022 UMA Rising Scholar. 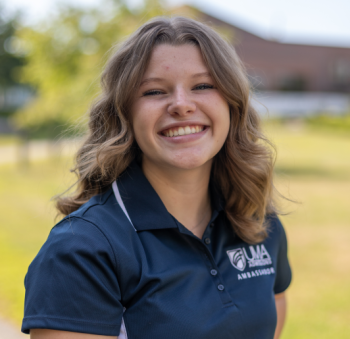 Hayden comes to UMA as a recent high school graduate from Erskine Academy. She starts her first semester in the Early Education program with the goal of teaching at the grade school level. When Hayden is not in the Admissions office filming TikTok videos, she splits her time working in the admissions department and as a substitute teacher at China Primary School. Hayden’s sister is a graduate of UMA so deciding to attend UMA was an easy decision. The existing support systems and the ability to stay local were the reasons she chose to call UMA home. Hayden hopes to share with other local students that attending a college close to home can provide the same experience as attending out of state. 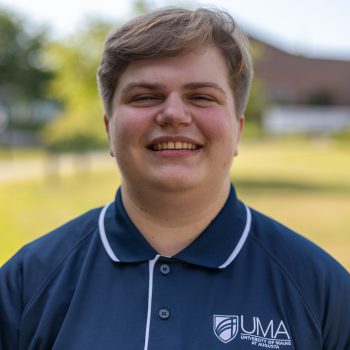 John is joining UMA as a first-year student in the Social Science program.  Originally from Winthrop, Maine, John was drawn to UMA because of the small college setting and the cost was much lower than other options he had explored during the college search. Other than staying in the dorms, John’s favorite thing about UMA is the strong sense of community and the support that community provides. As an ambassador, John hopes to support incoming students and make applying to college less nerve-wracking. 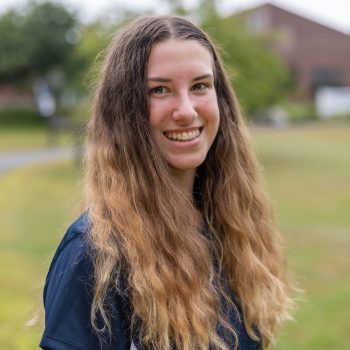 Sammy is a freshman in the Liberal Studies program. Although she is in her first semester, Sammy is not unfamiliar with UMA – her sister Hailey was also an admissions Ambassador for UMA while studying Early Education. As a participant with Jobs for Maine Graduates Sammy comes to UMA with a strong support system around her and she hopes to connect other students with the program as they transition to college life. Sammy chose UMA because of the cost and the small class sizes and she is excited to educate incoming students about the resources that UMA can provide. 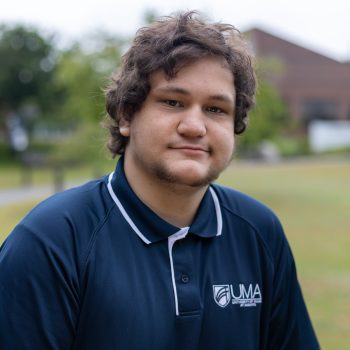 Logan is a first-year student in the liberal studies program living in Stevens Commons. He has a strong interest in photography but is using his first year to explore what career path he plans to choose. Logan appreciates the personal nature of UMA and spends his spare time maximizing the resources available TRiO and Student Support and Development departments. Logan is the admission letter and packet master, so if you received a letter of Admission from UMA  – it’s likely that Logan packed it for you! 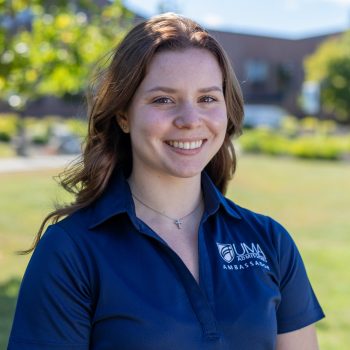 Colby is a transfer student in her first year in UMA’s Dental Hygiene Program. She is also the Executive Secretary of the Bangor Student Government Association (SGA). From Canaan Maine, Colby has the benefit of being directly in the middle of Augusta and Bangor – allowing her to serve in her role as an Ambassador on both campuses. She decided to choose UMA because of the affordability, impressive Dental Hygiene program, and supportive community. She loves the small class sizes which provide her the ability to make connections with classmates and easily get help from professors. If you’re on the Bangor campus, you’ll find Colby in the Nottage library – it’s her favorite place on campus! 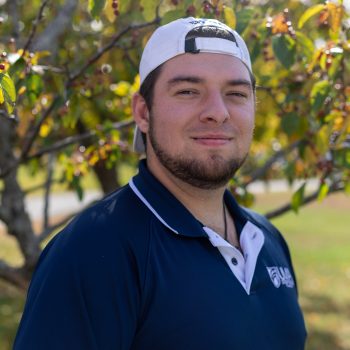 Sal is in his final year in the Architecture program. Hailing from the Garden State of New Jersey, Sal was drawn to UMA because of the curriculum and engaging program faculty. Being the only accredited Architecture program in New England – Maine was calling Sal and he knew it is where he had to be! Although Sal is new to his role as an Admissions Ambassador, he has a lot of experience as a UMA student. Serving as the Augusta SGA President and living since his arrival, Sal is the perfect person to show prospective students how to maximize the student experience at UMA. Sal was also named a 2022 UMA Rising Scholar.

Would you like to coordinate a project with a UMA Admissions Ambassador?
Contact Ariel Cassista to find out how!

Check out our Viewbook!